Artists have techniques for stripping away the meaning of an object, so that they can concentrate on its shape. An example often used is a pair of glasses. We all have a cartoonish symbol for these: two circles connected by a line. When drawing, it's very tempting to draw this symbol rather than what's actually there. So we need psychological techniques to make us concentrate on the latter. I'll explain two of these techniques, mention a psychological effect which might do the same, and then get onto some very interesting experiments using transcranial magnetic stimulation.

By the way, the phrase "Stripping Away Meaning" is due to Glyn Humphreys, who I discussed this with at Experimental Psychology.

Negative space is the space around and between objects. Many artists concentrate on this space, rather than the objects themselves, in order to see it more accurately. Here are two typical articles about the use of negative space: "See Like an Artist: negative space" by Jay Alders, and "Hand Drawing Demo #6: Reviewing Left Brain/Right Brain" by Anne Bobroff-Hajal.

I've come across drawing exercises which recommend copying inverted images. As with negative space, this is to make the brain concentrate on actual shapes instead of its symbols for objects. Here are two typical articles about this: "Upside down Drawing and Contour Drawing" by "Davy"; and "Day #031 - Drawing Picasso’s Igor Stravinsky Upside Down" by "Neelima".

Inverting spectacles have been used in some famous experiments on how subjects adapt to seeing the world upside down. Could they help artists pay strip away meaning? Nowadays, one could probably use virtual-reality glasses to run a program that inverts images as you look at them.

Cold water in the ear

I found the paper "Spatial- and verbal-memory improvement by cold-water caloric stimulation in healthy subjects", by D.Bächtold, T.Baumann, P.S.Sándor, M.Kritos, M.Regard, and P.Brugger. They say that putting cold water in subjects' left ear sped up their recall of object locations, while water in the right ear sped up recognition of words. They suggest that the stimulation somehow activates structures in the opposite hemisphere, speeding up cognitive processes there. Could this be useful?

Perhaps not. Glyn Humphreys told me the effect is too short-lived to be any use. Also, it causes nystagmus.

Also, many vision researchers believe that the brain has some kind of low-level representation of what it sees, containing amongst other information, that about edges. In other words, a kind of line drawing. If this is so, is there any way to give the "drawing" parts of the brain direct access to it? Drawing something accurately can be very tricky, needing much estimation and comparison of line lengths and angles. However, if the brain does keep a reasonably faithful line drawing of a subject, copying it ought to be a relatively simple neural process.

Every artist would love to have such an ability. It has been suggested that this is how the savant artist Stephen Wiltshire manages to draw scenes such as the Houses of Parliament from memory after only a brief glance at them. So I was excited when I read that Allan Snyder and colleagues in Sydney claimed to have enhanced drawing by using transcranial magnetic stimulation. Here's a quote from New York Times journalist Lawrence Osborne's article "Savant for a Day":

Two minutes after I started the first drawing [of a cat, under transcranial magnetic stimulation], I was instructed to try again. After another two minutes, I tried a third cat, and then in due course a fourth. Then the experiment was over, and the electrodes were removed. I looked down at my work. The first felines were boxy and stiffly unconvincing. But after I had been subjected to about 10 minutes of transcranial magnetic stimulation, their tails had grown more vibrant, more nervous; their faces were personable and convincing. They were even beginning to wear clever expressions.

I could hardly recognize them as my own drawings, though I had watched myself render each one, in all its loving detail. Somehow over the course of a very few minutes, and with no additional instruction, I had gone from an incompetent draftsman to a very impressive artist of the feline form.

The details of these experiments are reported in the research paper "Savant-like Skills Exposed in Normal People by Suppressing the Left Fronto-Temporal Lobe" (Journal of Integrative Neuroscience, Vol 2, No. 2, 149-158 (2003)). Here, from page 4 of the link, are two sets of images, drawn before, during, and after TMS: 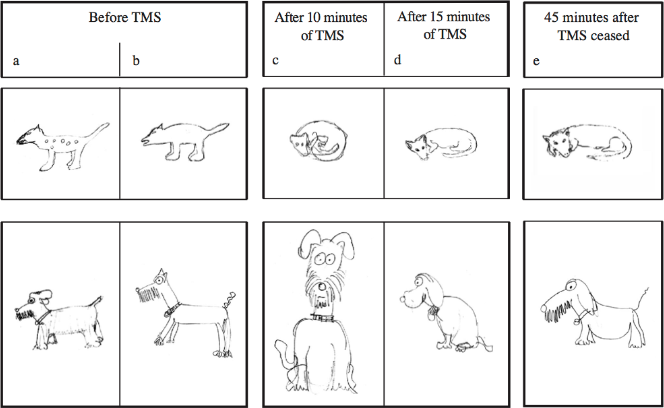 I would love to be a subject for such experiments, including on retaining the ability once stimulation ceases. I asked Roi Kadosh at the Cohen Kadosh Lab in Oxford about these. Unfortunately, he didn't know anyone with the necessary expertise. The experimental protocols differ between brain areas, and his lab works on different areas to those of the Snyder experiments.