In the essay “Drawing as Translation” which is the topic of my previous post, I had this little diagram: 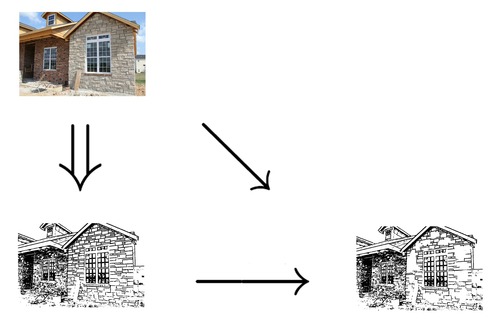 This represents the process of restoring the “balance” of a drawing, if one were first to copy it mechanically from the original scene. Imagine a pen-and-ink drawing of a house. If the drawing showed every brick and every slate, it would look too “busy”. There would be far too much density of line on the walls and roof, as opposed to neighbouring areas such as windows and doors. In reality, the bricks don’t stand out as much as our drawing would make them do, and we need to restore that balance. We can’t do it by thinning or greying the lines around them — the language of pen and ink doesn’t allow that — so we do the next best thing. We erase some patches of brick altogether.

That’s illustrated in the diagram. The double arrow, which as it were has its head in one language and its tail in another, represents the original mechanically-made translation from scene to drawing. Then the single horizontal arrow, which has its head and tail in the same language, represents “debricking” or “detexturing”. They compose to give the diagonal arrow, which represents going from the tonal balance in the original scene, to that in the final drawing. In mathematics, this would be called a generalised inverse: it’s an operation which undoes another, not exactly, but as closely as the circumstances allow.

Or, and with more mathematical potential, it might be possible to see this as the operation that category theorists call “adjunction”. I say more about this in “Drawing as Translation II”. Adjunctions are extremely powerful mathematical tools. It would be interesting if they could be used to define aesthetic measure.